The UK’s most popular seaside resort by a country mile, situated on the Lancashire
coast between the Ribble and the Wyre estuaries on the Irish Sea, by road, about
109 miles east of Douglas, Isle of Man, 49 miles north west of Manchester, 56 miles
north of Liverpool and 33 miles south of Lancaster.

Throughout the middle ages, Blackpool was a coastal hamlet in Lancashire’s
Hundred of Amounderness, one of the six sub divisions of the County and remained
as such until the mid 18th century when it became more popular to travel to the
coast. In 1781 a new private road built by Thomas Clifton and Sir Henry Hoghton
encouraged visitors to visit the now known seaside resort so much so, horses,
stage coaches began running from Manchester in the same year and from Halifax
in the following year.

Blackpool’s real popularity grew when in the 1840’s, a railway was built connecting
it to the industrialised North of England, making it possible to reach the coast for the
first time for many and this then resulted in an influx of settlers, so much so that in
1876 Blackpool was incorporated as a borough, governed by it’s own Town Council
and Aldermen. Blackpool was fast becoming a booming resort with a population of
14,000 with it’s own promenade, piers, trams, theatres and by the turn of the 20th
Century the population had risen to just under 50,000 and by the beginning of the
1950’s to 147,000.

Blackpool is by far the most popular seaside resort in the UK welcoming an
estimated 20 million visitors in 2018 and is it any wonder with the vast amount
of attractions for visitors to be entertained by, the fantastic shows throughout the
year, the top rate stars that perform for you, the number of first rate restaurants and
bars, the 14 miles of beautiful beach, sea and promenade, whatever you want from
your holiday or visit to Blackpool, you are bound to find it here in the Entertainment
Capital of the Country. 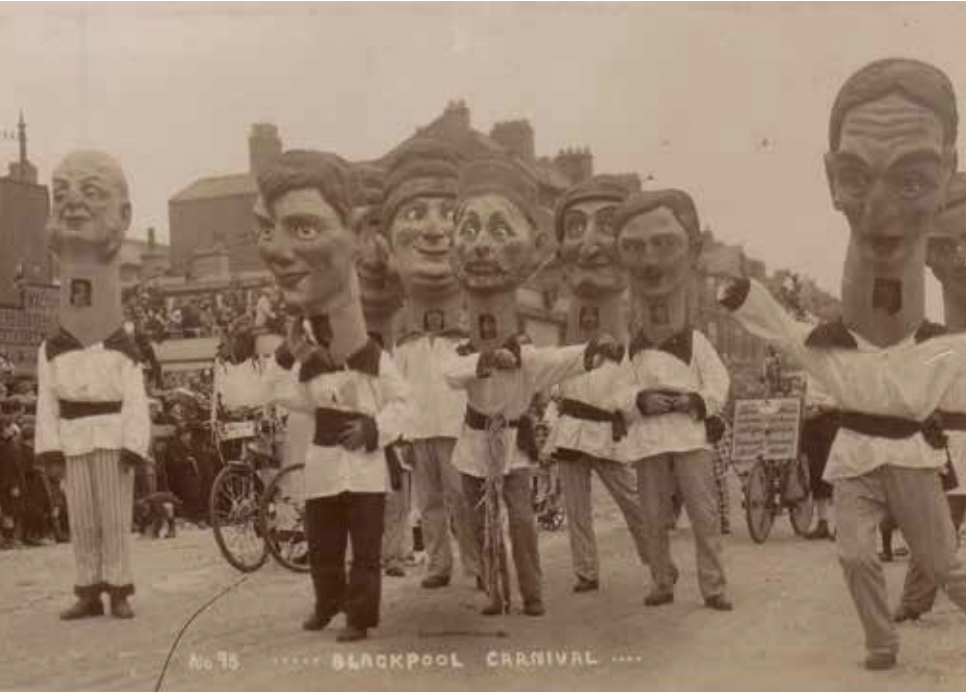 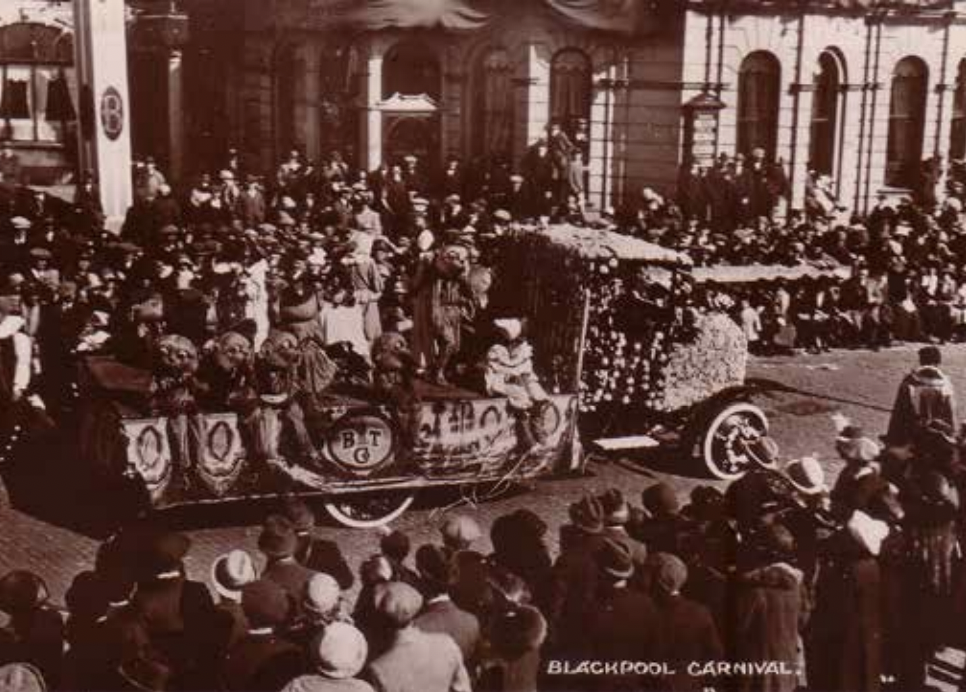 Blackpool has never been slow in coming forward and having a party, ensuring all involved are having fun, never more has this been the case as in 1923 when the first ever Carnival was held and to be repeated during the following year. Never before and never since have so many visitors travelled to the town for the one event, either to participate in or watch processions, pageants, motor races, dog shows to name only a small part of the celebrations.

Huge crowds lined the streets, especially the promenade, just to get a glimpse of the Carnival Royalty, the huge peculiar looking large heads and the decorated vehicles and trailers that were part of the procession. The Carnival King and Queen flew in by plane and landed on the beach. The 1923 Carnival lasted for eight days such was it’s popularity and it is estimated that over 2 million people were attracted to Blackpool, amazing to think that the main form of transportation besides the bicycle and horse and cart was the steam train, yet that vast number of people managed to get to the Town. However this event undoubtedly lifted the doom and gloom of the years after the First World War, prior to which the first ever Annual Light Festival had started and which is still at the forefront of the attractions that Blackpool is known throughout the World for, The Illuminations. The whole of the community seemed to be involved, schools were given special permission to close so that all the local children could be part of the events, businesses were heavily involved, the whole event being organised by the local council, each day having a different theme.

The rainbow of colours, the pandemonium of dancing, singing, drumming, excitement, enjoyment and festivities were the essential ingredients of a fantastically successful event.

The Blackpool Carnival group was created in 2016 to organise the Blackpool Carnival for the first time for several years. This is an event organised by the local community, participated in by the local community, for the benefit of the local community yet  attracting  thousands, if not tens of thousands of visitors to this fantastic town of Blackpool. It is the Town’s chance to showcase the multi cultural talent within, be that musical, theatrical, dance, business or whatever but at the same time coming together as one community and all working together with one goal in mind, to have a highly successful and happy day for all concerned.

Six years ago, a small group of passionate local Blackpool South Shore residents got together to resurrect the Blackpool Carnival, After two previous very popular annual carnivals, the third event 2019 is being expanded to cover two days, a stage show on the first evening and a full typical Carnival road procession, including a stage show and a whole host of children’s amusements, stalls for local crafts people, charity stalls and a whole lot more on the second day. So far these events have been able to bring some of the local  deprived population  together, this year’s event which is bigger and better than in previous years, will have the effect of bringing even more of the local community in contact with each other, enabling the participants to showcase the wealth of  talent that there is locally.

In addition, workshops are being organised with our partners and local schools, to come up with an idea for their participation, to describe that idea on paper, to source if necessary any materials needed and finally to actually bring this idea to fruition by taking part in the Carnival itself. Similarly we are sourcing professional mentors to teach the necessary skills and guide the vast number of local artists and children enabling these people to have the confidence to bring the best out of themselves, proving what can be achieved with a little guidance and motivation.

Our aim therefore is to expand the event year on year, include more and more of the local community involvement, helping to enhance the area and skills therein, thus bringing more pride of achievement  and solidarity to the individuals within the community.

In 2016, the event was organised by the newly formed Blackpool Carnival Local Community Group, in 2018, this group was superseded by the formation of The Blackpool Carnival Community Interest Company which was registered at Companies House on the 6th August 2018. This Community Interest Company will help in the recognition of this area and the lives of the local people and by the creation of workshops throughout the year, will bring extra skills and prosperity to the community. Since 2016 when the first Committee was formed,  the nucleus of which has stayed the same, the number of people in the Committee has expanded to include a diverse ethnic mix of abilities and a better representation of the area, thus giving the benefit and experience of organising such an event to those underprivileged residents who wouldn’t ordinarily be part of such a Committee. This already illustrates how our historical project has helped to develop our work

In addition to the workshops, other events are organised throughout the year together with other local charities and groups bringing awareness to those organisations. Also we are acquiring and preparing a local retail unit in which to firstly bring awareness to the Carnival event, secondly to sell locally made creative art products and thirdly to raise funds for future events.

From these bases it is planned to expand the Carnival event year on year with the involvement and increasing expertise of the Committee, the local community, businesses, charity organisations, schools and local artists culminating in the replication of the original 1923 Carnival by a nine day centenary celebration.

This event which is a colourful, spectacular, musical extravaganza of all inclusive diversity,  encourages the  deprived local residents who are participating, all of whom are within easy reach of the various workshops and subsequently the performance areas on the promenade. Equally the local schools are similarly very conveniently placed. The amateur and semi professional local performers are encouraged to be involved  highlighting their particular talents as well being able to inter-react with the professional mentors, who are independent and mobile.

The event is aimed at the wide spectrum of our local community including the local Dignitaries and Councillors, furthermore of course, Blackpool being a very popular UK tourist destination will clearly attract visitors who may already be in the Town but also tourists who are specifically  visiting the Town for this event.